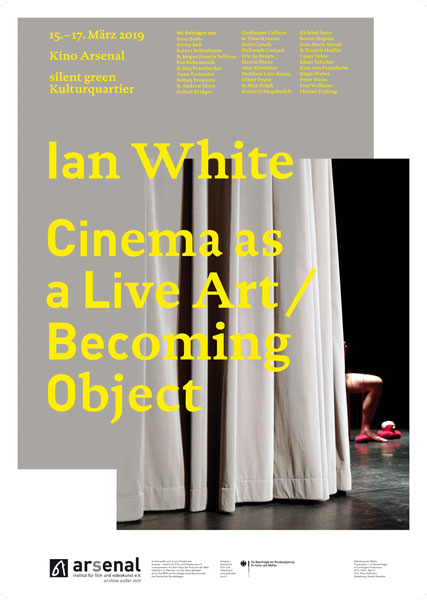 Klaus Weber, Candle in the light
Rosa Barba, Setting a Performative Frame Between Fact and Fiction
Rainer Bellenbaum, Megan Francis Sullivan, Belladonna
Martin Ebner, In a Sideshow by the Sea
Guillaume Cailleau, Timo Kreuser, Bestimmt
Florian Zeyfang, F66 Geisterschiff (revisited)
Matthew Lutz-Kinoy, Fermentation and The Path of Least Resistance
Sam Williams, a fruiting body/to mate with (not clone) my own arm
Scott Caruth, Untitled
Anja Kirschner, “there is a collective to the extent that an emotion is structured”

The evening will be dedicated to Ian White’s cinema program Kopietheater 1, which took place in 2010 as part of Forum Expanded and showed works by 1 4 participants.
On March 16th contributions by former participants of Kopietheater 1 as well as newly invited artists will activate Ian White’s curatorial instructions, which explored ways in which context and the act of reading can become the material content of our experience in the auditorium.

As part of his exploration of Arsenal’s archive between 2008 and 2012, the curator and artist Ian White (1971–2013) compiled two film programs, presented performances and set up several collaborative projects with artists. He considered the cinema and theater stage spaces of possibility and politics, where the relationship between live events and moving images, production and performance, immateriality and objecthood could be renegotiated.

Taking Ian White’s work for Arsenal as an example, Ian White – Cinema as a Live Art / Becoming Object, which will take place on March 15th and 16th at Arsenal and on March 17th in the cupola hall of silent green Kulturquartier, explores the possibility of a retrospective interaction with Ian White’s site-specific, interventionist and queer curatorial and artistic practice with film and performance. At both venues, performances, events and lectures will take place offering individual approaches to Ian White’s work and exploring questions about film as a live event, performance and the possibility of re-performance. Practitioners with diverse backgrounds, whose artistic, curatorial or scholarly work focuses on the relationship between film and performance, were invited to initiate a dialogue with the practice of Ian White. Films from Arsenal’s archive, which had been chosen by Ian White for his performances and programs will be screened at Arsenal and silent green. Posters and a brochure designed by Harald Niessner which documents Ian White’s work for Arsenal between 2008 and 2012 will accompany the program. Ian White – Cinema as a Live Art / Becoming Object was curated by Anne Breimaier and is part of Reflect-Suspend-Dismantle, a year-long program around the work of Ian White, which takes place at various locations in Berlin, and is delivered in collaboration with curator Kirsty Bell, KW Institute for Contemporary Art, DAAD Artists-in-Berlin Program, and the Estate of Ian White.

The program will open with a film evening at Arsenal on 15th March.
Kirsty Bell will introduce GENTLEMEN (2003), a film by artists Oliver Payne and Nick Relph, narrated by Ian White: a portrait of London and its youth culture, both on the verge of extinction. We will then screen shorts by Karola Schlegelmilch (BAUCHLANDUNG, G 1991), Klaus Telscher (HER MONA, G 1992), Hellmuth Costard (BESONDERS WERTVOLL, FRG 1968), Peter Weiss (STUDIE IV (FRIGÖRELSE), Sweden 1954) and Robyn Brentano & Andrew Horn (CLOUD DANCE, USA/FRG 1980), which were shown as part of Ian White’s “Trauerspiel 1” performance at HAU 1 (Hebbel am Ufer) on March 13th 2012. “Trauerspiel 1”, Ian White’s only theater production, was performed together with Ingolf Sander-Lahr and comprised of five dances which alternated with five film projections. The performance resulted from Ian White’s exploration of Arsenal’s film archive and his reading of Walter Benjamin’s book “Ursprung des deutschen Trauerspiels” (The Origin of German Tragic Drama, 1925). It was performed in the framework of an evening titled “A Shared Stage of Contingent Production”, alongside a performance by Johannes Paul Raether.

The evening of March 16th at Arsenal will be dedicated to Ian White’s cinema program “Kopietheater 1”, which took place in 2010 as part of Forum Expanded and showed works by 14 participants. On March 16th contributions by former participants of “Kopietheater 1” as well as newly invited artists will activate Ian White’s curatorial instructions, which explored ways in which context and the act of reading can become the material content of our experience in the auditorium With contributions by Rosa Barba, Rainer Bellenbaum, Martin Ebner, Matthew Lutz-Kinoy, Sam Williams, Klaus Weber, Florian Zeyfang, and others.

The one-day program of March 17th at silent green is dedicated to Ian White’s film and performance program “It’s Not The Homosexual Who Is Perverse, But The Situation In Which He Lives: Art, Cinema and Context Now” which he curated in 2008/9 as Arsenal’s first DAAD film curator in residence. The program took place at Arsenal, Tanya Leighton gallery and the lab.oratory sex club. Films by Rosa von Praunheim, Danièle Huillet/Jean-Marie Straub and Richard Serra, shown originally in these different places, will be accompanied by performances by young artists, who responded to a call for participation to explore Ian White’s work. NICHT DER HOMOSEXUELLE IST PERVERS, SONDERN DIE GESELLSCHAFT IN DER ER LEBT (Rosa von Praunheim, FRG 1971): The story of Daniel, who arrives in the big city and walks through all stages in the life of a gay man in the 1970s is accompanied by a warning voice heard off-screen and extracts of interviews.
OTHON (Danièle Huillet, Jean-Marie Straub, F/FRG/I 1970) is a literal adaptation of the play by Pierre Corneille, which was first staged in 1664. The film was shot in the original locations. In five acts, it tells a story of love and power in ancient Rome. In 1968, Richard Serra filmed his own hands carrying out various actions in four shorts. The way that he staged his hands according to Rosalind Krauss is a direct reference to the medium of film, while at the same time a filmic emphasis of his own artistic potency.

Between the screenings accompanied by performances, scholars and curators will give short impromptu presentations that will reflect on Ian White’s historically informed and art critical practice. (ab)

A seminar ticket for all three events is availbale for €16 (only silent green: €12) at the Arsenal box office.
Part of the “Archive außer sich” project.