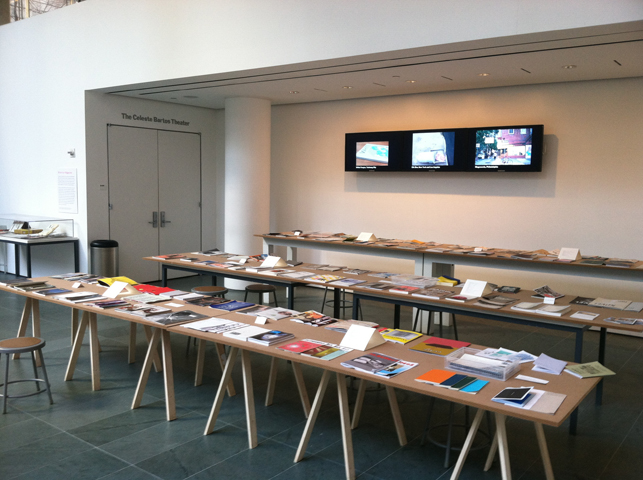 Throughout the twentieth century, innovations in international avant-garde visual arts and design were often first expressed in the informal context of a magazine or journal. This exhibition, drawn from the holdings of The Museum of Modern Art Library, follows this practice into the twenty-first century, exploring the various ways in which contemporary artists and designers use the magazine as an experimental space.

The works on view, all published since 2000, represent a broad array of international titles—from community newspapers to image- only photography magazines to conceptual design projects. These publications illustrate a diverse range of image-making, editing, design, printing, and distribution practices. There are connections to the past lineage of artists’ magazines and the little architecture and design magazines of the twentieth century, as well as unique applications of new image-editing and printing methods. Assembled here, these contemporary magazines provide a firsthand view of the latest practices in art and design in print and represent MoMA Library’s sustained effort to document and collect this medium.

Millennium Magazines
February 20–May 14, 2012
Mezzanine, The Lewis B. and Dorothy Cullman Education and Research Building 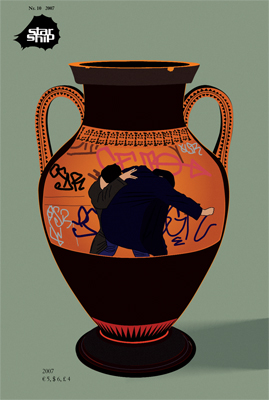 STARSHIP is a Berlin based art magazine founded in 1998 by Hans-Christian Dany, Martin Ebner and Ariane Mueller (and Gunter Reski, until 2000).
STARSHIP is a magazine that permanently shifts forms and formats:
it appears as a print magazine about once a year but also takes the shape of a gallery, a cinema space, a publishing house, or a production office, organizing exhibitions and concerts.
STARSHIP is the collective art practice of its editors and serves as a collaborative platform for inviting other artists and writers.

The city is very flat. The sun, now in winter coming in low, finds it‘s mirror at the highrises, owned by danish pension funds, creating a fake alpen-glow. Just now at the moment it amazes me, looking out of the window. Later in the evening spanish speaking travellers form our natural habitat. They sit in the subway, clinging to their beer bottles, freezing, talking about their relationships.

During daytime they are looking for the same flats as our neighbours, whose Hartz 4 transfer money doesn‘t cover the rising rents anymore. The mythical cheap flats of Berlin.

Flats to the contrary are scarce but the city is selling off other interesting real estate. Airports, churches, bunkers. The strategic planning of the city has stopped social housing ten years ago. The last master plan of Berlin works with scenarios, a negative, a neutral and a positive. The positive expects Berlin‘s population to stay stable. The others depict population losses. Tearing down blocks has come to a halt, though, since they can be sold in huge numbers to foreign funds. The average time frame of ownership is calculated with 18 months.

I listen to the radio while typing this. A well known cologne gallery owner, who had moved to Berlin five years ago, gets interviewed. Ah ja, it is Armory show time. There are sixty collectors in Berlin and all of them are from West-Germany, he says and he wonders, why all of these newly created structures in Berlin have not resulted in collecting art.

Since 1998 we are running an art magazine here. Later on other art magazines moved to Berlin or were newly established. Sometimes we meet other editors and we may sit and wonder if any of us reads what the others are writing. We imagine they set their themes randomly. I guess they suspect us to do the same. We would prefer not to have theme issues. But when addressing people to write and to contribute they inevitably ask for the theme of the next issue. We imagine a whole set of questions and suggestions, answers and proposals going back and forth between the things we see, we read, we write.